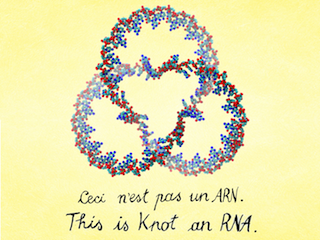 No one had checked before, but RNA, the nucleic acid involved in many cell functions including protein synthesis, appears to be the only « strand of life » not to have knots.

Over the years, advances in structural biology have firmly established that both proteins and DNA, although subject to evolutionary selection, do not escape the statistical law whereby a sufficiently long and compacted molecular strand will inevitably be entangled. However, no one to date had looked into the case of RNA.

Using the structural description provided for approximately 6,000 RNA chains entered in the Protein Data Bank, a team of researchers from the SISSA (Italy) and the IPhT has performed a thorough study of the presence of knots in these biopolymers.

In order to detect knots, they used the following methods:

The outcome is that over the 5466 studied structures, only 3 came out with a knot.

Looking more closely at these structures, they noted that all 3 structures had been obtained by the cryo-em (electronic cryomicroscopy) method, and in all 3 cases, the experimentalists had stressed the presence of strong uncertainties in the resolution of the structure, particularly in the knotted region! In addition, RNAs with very homologous sequences and structures, but resolved with more accurate techniques (such as crystallography), do not exhibit such knots. The authors thus concluded that these knots are probably experimental artifacts and that RNA is the only strand of life which does not have knots.

The reasons for this apparent simplicity is probably manifold: evolution may have selected unknotted sequences, since they fold more rapidly and more reliably; they could be treated more efficiently by the cellular machinery, … And maybe, after all, we will find knots in the RNAs that will be discovered in the future!