Scientifique
Beyond Amplitudes’ Positivity and the Fate of Massive Gravity 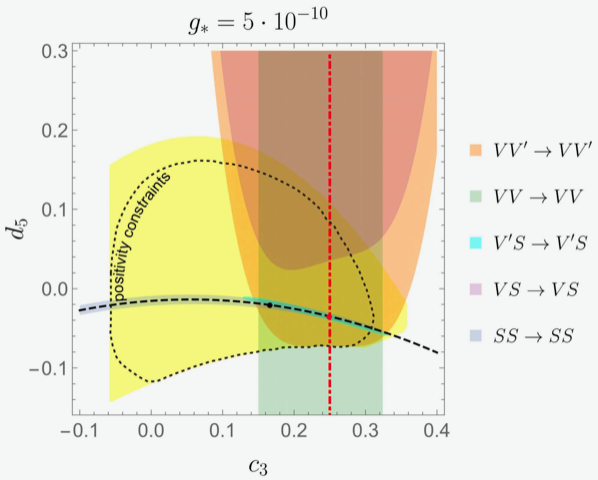 The idea that physics at low energy, i.e. large distances, can be described in terms of light degrees of freedom alone is one of the most satisfactory organizing principle in physics, which goes under the name of Effective Field Theory (EFT). The effect of short-distance ultraviolet (UV) dynamics is systematically accounted for in the resulting infrared (IR) EFT by integrating out the heavy degrees of freedom, which generate an EFT built of infinitely many local operators. Yet, EFT’s are predictive even when the UV dynamics is unknown, because in practice only a finite number of operators contributes, at a given accuracy, to observable quantities. The higher the operator dimension, the smaller the effect at low energy.

Remarkably enough, extra information about the UV can always be extracted if the underlying Lorentz invariant microscopic theory is unitary, causal and local. These principles are encoded in the fundamental properties of the S-matrix such as unitarity, analyticity, crossing symmetry, and locality. These imply a UV-IR connection in the form positivity bounds. In a recent paper, https://journals.aps.org/prl/abstract/10.1103/PhysRevLett.120.161101, Brando Bellazzini and collaborators have discovered new, more powerful, positivity bounds. The new bounds are so stringent that certain theories of modified gravity, such as ghost-free Massive Gravity, are either ruled out or unable to describe gravitational phenomena where General Relativity has been successfully tested. This greatly reduces the landscape of theoretically consistent modifications of general relativity, and it can be applied to several other interesting EFT’s.
C. Pepin, 2018-05-17 00:00:00
Tweeter