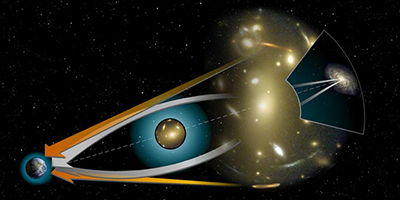 A century ago Albert Einstein used his new theory of gravity – the general relativity - for evaluating the bending angle of rays of light under the gravitational pull from the Sun. Ludovic Planté, Pierre Vanhove and their colleagues have evaluated for the first time the quantum gravity correction to this bending angle.

The computation is done in the framework of the low-energy effective field theory, which allows evaluating large distance effects by keeping only low energy fields and couplings. This contribution is universal to any theory of quantum because since it is independent of (any unknown) high-energy degrees of freedom.

The quantum correction depends on the spin of the deflected massless particle, in contrast to the classical contribution. Therefore it violates the equivalence principle but preserves the fundamental symmetries of the theory on which Einstein based his theory of general relativity.