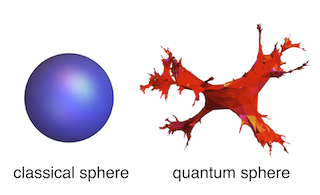 In 1981, the famous theoretician A. Polyakov introduced the quantum Liouville theory as a model for the quantized string. This theory “quantizes” the Liouville equation R=-1 of classical geometry, which characterizes Riemann surfaces with negative curvature. It is thus a quantum theory of gravity, where the geometry of a two dimensional space-time in quantized (1 time dimension + 1 space dimension).

Liouville theory has remarkable properties. It is a conformal theory (it is endowed with an infinite symmetry group, the same as for string theories and critical systems such as the Ising model in two dimensions). Liouville theory appears, sometimes unexpectedly, in many problems of theoretical physics and of pure mathematics. It has been therefore very much studied via the methods of Conformal Field Theory and of Integrable Systems. But it is also related, in a deep but still partially understood way, to combinatorial models where space-time is discretized as a random lattice (random maps, matrix models). In these two approaches (continuous and discrete) the IPhT has brought major contributions.

Recently a third player entered this arena: probability theory! It already led to a better understanding of several aspects of 2 dimensional quantum gravity in the case where curvature is neglected and where the theory is simpler, and reduces to a Gaussian Free Field (quantization of the classical equation R=0).

A team of physicists and mathematicians (IPhT, Helsinki, Paris-Est University and Ecole normale supérieure) succeeded in applying probabilistic methods to the full Liouville theory (R≠0), firstly in the case of surfaces with the sphere topology. This opens a new field of applications to the probabilistic approach to 2 dimensional quantum gravity, and should allow a better understanding of the relations between Liouville Theory and Random Geometries.