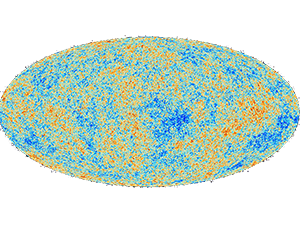 Zhiqi Huang and Filippo Vernizzi have developed at IPhT the first consistent numerical code to compute second-order effects in the cosmological perturbations and, in particular, the intrinsic non-Gaussian features expected in the cosmic microwave background temperature anisotropies.

The cosmic microwave background is Gaussian to very high accuracy but there may be tiny deviations from a pure Gaussian distribution, that are remnants of certain models of the early universe. For this reason, one of the primary goals of the Planck satellite mission was to measure these deviations. Nevertheless, the signal coming from the early universe is always biased by non-linearities due to gravity and fluid dynamics, which must be fully understood to correctly interpreting the data.

The numerical code developed at IPhT completely characterizes these nonlinearities and allows to filter out the primordial signal. It will be soon made public to be used by the scientific community.