The new frontier in statistical  physics is to build a general theory of systems out of equilibrium, continuously evolving with time. No theoretical framework is available that would encompass the physics of systems interacting with their environment through continuous exchanges of charge, spin, energy, or momentum. Yet, in nature, heat and matter fluxes are ubiquitous and systems far from equilibrium are the majority rather than the exception. Artificial devices (complex networks, urban patterns) as well as living matter provide us with prominent examples. The IPhT is a major actor in the study of these crucial  issues. A global perspective of time-dependent processes involving a large number of interacting elementary constituents requires  elaborate theoretical tools that can be developed using  techniques of quantum field theory, conformal symmetries, Schramm-Loewner evolution and integrable systems. Exact solutions of models far from equilibrium have allowed us to determine rare event statistics and large deviation functions that play the role of nonequilibrium thermodynamic potentials. Sophisticated renormalization procedures, at the level of the configuration space and its dynamics, have been developed to characterize the evolution and phase transitions in random systems (spin glasses, polymers, colloids). All these methods  are now applied very successfully to interdisciplinary subjects such as computer science (constraint satisfaction, error correcting codes, analysis of search algorithms) and biology (genetic and evolutionary models). The study of various networks, smart-grids, and their evolution in space and time have fundamental applications in epidemiology and in controlling the spread of infectious diseases. Finally, the quantitative study of geographic and urban networks using the mathematical apparatus of statistical mechanics is a rapidly developing theme that offers a promising cross-disciplinary  perspective.

The physics of condensed matter deals with spectacular quantum phenomena that occur at the macroscopic scale, when the temperature is low enough. Superconductivity, or conduction of electrical current without resistance, superfluidity, or frictionless flow, the Kondo effect, the fractional quantum Hall effect, in which the charge carriers are split as a result of interactions and quantum fluctuations, are examples of these fascinating and remarkable phenomena. Following their experimental observation, these quantum phenomena are studied theoretically by methods of quantum field theory, combined with advanced numerical techniques. These models, defined at the microscopic scale, are still poorly understood at the macroscopic scale when the interactions between the electrons become too strong. Low-dimensional magnets, as well as non-equilibrium systems, are also studied in depth at the Institute. 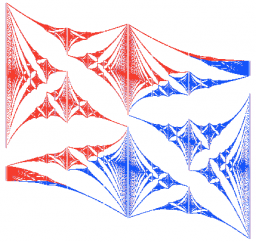 Hofstadter spectrum of an electron on a frustrated lattice.

Protein interaction with an RNA molecule.

Polymers provide physical realizations of stochastic processes such as Brownian motion or self-avoiding random walks. Other types of stochastic processes control the functioning of molecular motors and the folding of proteins. Some universal aspects of membranes (flexible films, biological membranes) are closely related to the random geometries studied in string theories and quantum gravity. When objects are charged (polyelectrolytes, charged membranes) or possess internal degrees of freedom, their physical and geometrical properties may be deeply modified: new phases may appear. Random polymer physics governs the complex interactions between chemically different monomers in biopolymers. One can study the denaturation of DNA or protein folding and RNA within this framework. For the latter, the classification of folded forms can be done using tools of topology (genus, Euler characteristic), leading to the development of powerful algorithms for structure prediction. In addition, most biopolymers carry charges, and the Coulomb interaction determines their universal properties of aggregation and solvation in the cell.

Magnetic field induced by the dynamo effect in a cylinder.